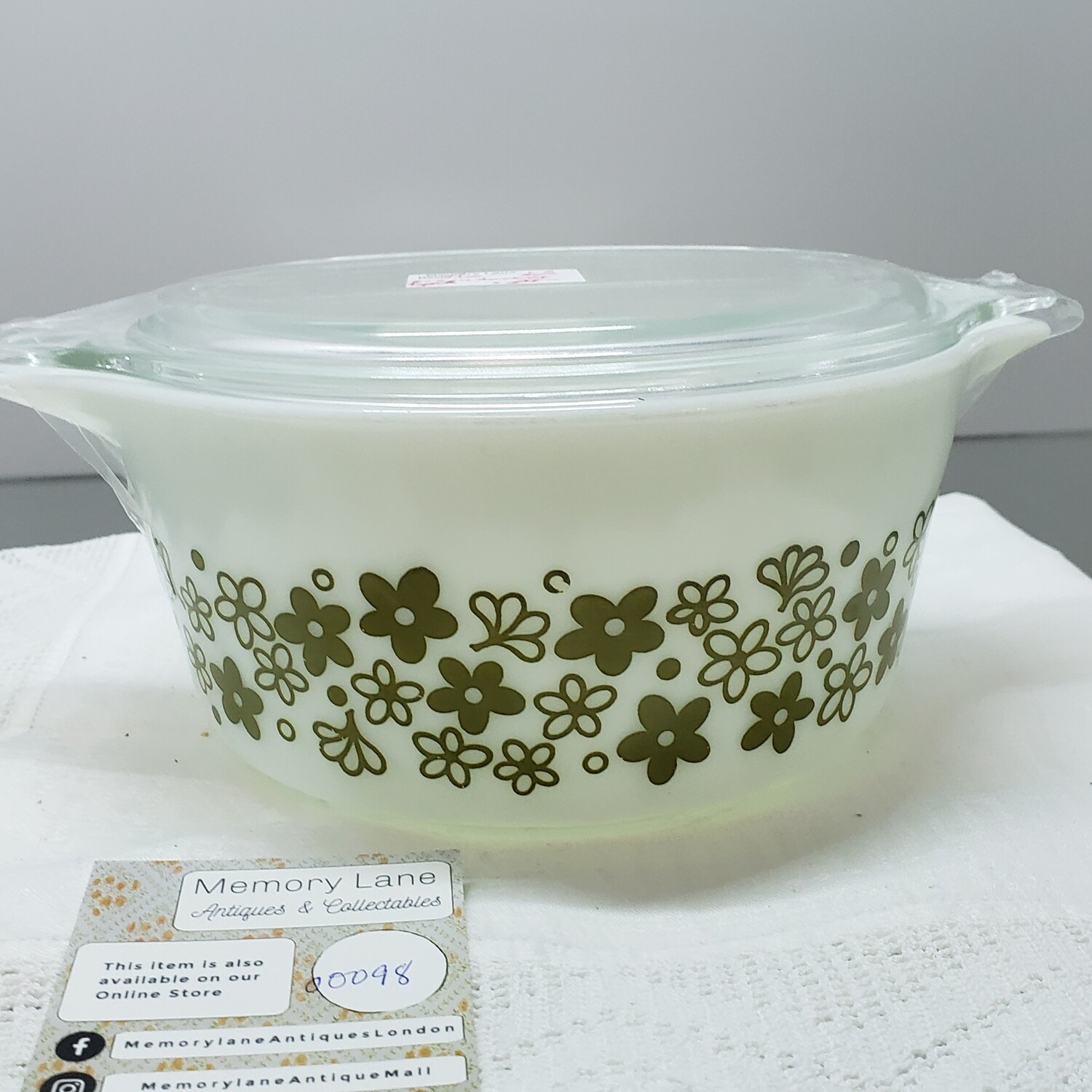 The origins of Pyrex lay in a problem the early-20th century railroad industry faced with broken lantern globes. When hot, contact by rain or snow would cause them to crack. Corning Glass was engaged to come up with a solution, which they did in the form of a borosilicate non-expansion glass formula they dubbed Nonex. While the perfect answer to the railroads' breakage issue, it was ultimately unprofitable in that few of the new type globes required replacement thereafter.

Nonex found success in other areas, however, including wet cell battery jars. When her ceramic casserole cracked, it was one of those battery jars, cut down to make a baking dish, that Corning researcher Jesse Littleton brought home for his wife to try. In her experiments with it, she found that the foods cooked faster, at lower temperatures, with the added benefit that she could see the food as it cooked.

With the Nonex formula altered to remove lead, work proceeded to develop a cookware line from it, which the company called Pyrex. And, as cookware, albeit expensive for the times, Pyrex proved quite the success, selling over 4 million pieces its first four years of production and an additional 26 million over the following 8 years..

The Great Depression in 1929 dealt Corning and Pyrex a great challenge. Part of its high cost lay in the fact that, even though annual production numbered in the millions, the pieces were still individually blown by hand. Corning was able to survive the poor economy by switching its Pyrex manufacturing process to automated machine pressing, thus enabling a reduction of retail prices by 30-50%.

While Pyrex was not the first high heat compatible glass of its kind, it certainly became the most successful in terms of both the scientific ware and kitchenware produced from it.

As kitchenware, and as bakeware in particular, Pyrex was marketed as being most versatile. Advertisements touted, just as Mrs. Littleton had observed, that it heated evenly, actually absorbing and conducting heat rather than reflecting it as metal utensils might. Its transparency allowed the cook to assess doneness without uncovering. Bread was advertised as rising better, and pie crusts as crisping on both bottom and top.

When the request came for a more durable messware for the military, Corning turned its attention to the opal ware produced by MacBeth-Evans, the Charleroi, PA glass company with which it had merged in 1936. The dinnerware developed was later marketed to the hotel and restaurant industry, and would eventually become the basis for the opal glass oven and kitchen ware popular over the next half century.

The introduction of color ware in the fall of 1945 and, later, new styles and decorative patterns would further enhance the attractiveness of the ware. The 1950s and 1960s saw the release of dozens of seasonal gift items, and the advertising focus shifted to their promotion.

New standard patterns and promotionals continued to be introduced up until about 1983. In 1986, however, US Pyrex opalware was all but discontinued. Curiously, Pyrex casseroles produced in England were imported and marketed for a brief time.

In the post-opal ware era, Corning continued to cultivate consumer interest for color and decoration by offering clear ware bowls painted in a variety of shades. Subsequently, sculptured and also tinted clear ware were produced.