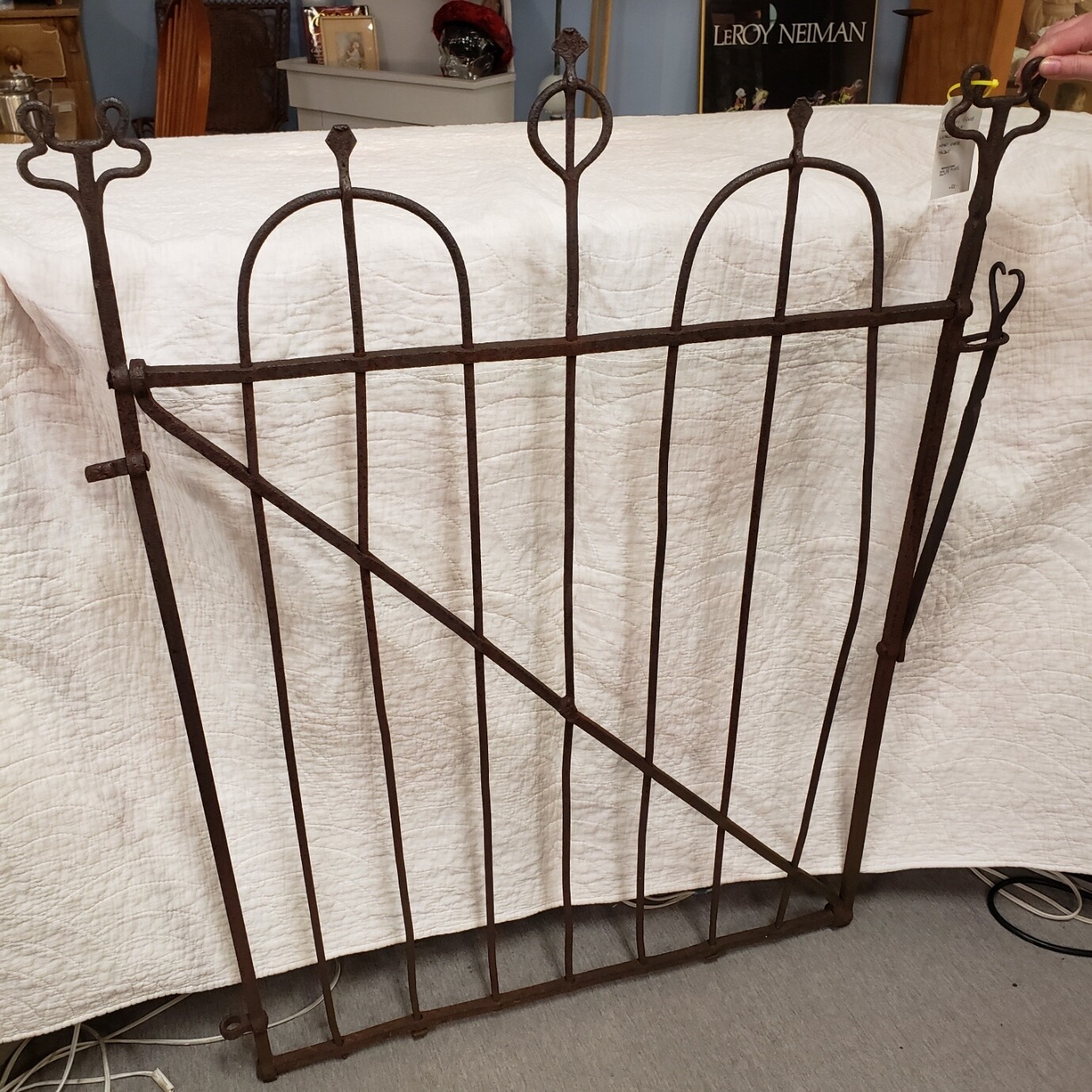 Beautiful, Historic Gate from 1870 - In excellent condition - From Waterloo - Dimensions are 40 inch by 27 inch

This item in not eligible for shipping because of weight of it. Please contact us to inquire about this item and the delivery service we could offer.

Blacksmithing existed within communities large and small in 19th century America. Although each blacksmith’s workshop, metalworking process, and expertise differed in some ways, they all possessed the general ability to fashion a variety of important items out of iron and steel. In a time when the rise of mechanized manufacturing still loomed on the horizon, Americans relied on their local blacksmith to create essential everyday products for use in the home and in the fields. Even after the rise of industry in the second half of the 1800s, blacksmiths found ways to remain vital members of their communities by evolving their services to fit specific economic needs.

The Rise of the Blacksmith in 19th Century America

The importance of the blacksmith in 19th century communities is eloquently documented by renowned poet Henry Wadsworth Longfellow in his 1839 work entitled “The Village Blacksmith.” Longfellow describes the hardworking nature and steadfast presence of the local smith. His romanticized portrayal of blacksmiths indicates that they possessed a good deal of prestige within American society at the time. The first half of the 19th century is considered by historians to be the “golden age” of American blacksmithing due to the demand for metalwork in newly developing communities on the frontier.

By 1860, the United States census recorded 7,504 blacksmith workshops and 15,720 workers employed within them. It also listed blacksmithing as the fourth most popular trade after lumber milling, flour milling, and shoemaking. At a time when the United States population hovered around thirty million, this was a significant number of people employed in blacksmithing and illustrates the demand for this service.

In the latter part of the 1800s, the significance of blacksmiths shifted as industrialization mechanized the processes of many trades. Mass production threatened to replace the work of blacksmiths, as it allowed for faster and more cheaply made products that could be replaced instead of repaired. For example, before 1850, blacksmiths forged nails at a rate of one per minute, which made them relatively scarce and expensive. Nails proved so valuable that arsonists would burn down buildings just to collect the nails left behind. By the end of the century however, machines could make hundreds of nails per hour and at a cost that made nails easily replaceable instead of prized.

Blacksmiths responded to the rise of industrialization by turning their attention to shoeing horses and making and repairing wagons and carriages. Factories had not yet replaced these products with a machine, and the increasing movement of people from farm to city required reliable means of transport. By shifting their attention away from smaller projects and focusing instead on horses and transportation implements, smiths maintained a level of prestige as skilled tradesmen within the transportation industry despite the increasing prevalence of mass production in other sectors.

The Role of Blacksmiths in 1800s Communities

Blacksmiths living in the 1800s took on the roles of both tradesmen and businessmen in order to manage successful workshops and provide a variety of services. Townspeople and farmers alike valued the range of skills blacksmiths possessed and relied on them to create the tools and implements necessary for survival. Smiths could manipulate metal in endless ways, but usually created and repaired farm equipment such as hoes, plows, rakes and other tools as well as hardware and wheels for wagons, kitchen utensils and horseshoes.

Blacksmiths who could take on an array of specialized projects had more value within their community than those who could not, so most smiths prioritized becoming a “jack of all trades” in order to strengthen their reputation and serve as many people as possible.

Smiths managed their businesses carefully and kept detailed records of daily work orders and the debts owed by their customers. They interacted with other business owners in their community to build solid professional networks and advertise their services. Because they worked for themselves, smiths had to skillfully negotiate their compensation, which often took the form of cash payments, traded goods, or services promised by customers skilled in other trades.

Becoming a successful blacksmith involved setting wages that could both sustain the smith and attract future patrons. Most blacksmiths charged based on the type of project and the time it took to complete it. For the basic repair of farm implements such as plows, rakes, and other equipment, blacksmiths typically earned between one dollar and a dollar and a half per day. For the creation of a new product, blacksmiths could expect to earn an average of five and a half dollars per day.

Becoming a Blacksmith in the 1800s

The demand for blacksmiths within American society in the 19th century led many young men to pursue the trade. Although there is evidence of female blacksmiths during this time period, men dominated the industry. Becoming a smith required many years of careful study and dedication. In the early 1800s, master blacksmiths who worked in the trade most of their lives and had an ample set of skills took young apprentices into their homes and workshops. Apprentices would be educated, fed, and clothed in exchange for assisting master blacksmiths in their shops and learning alongside them. Most apprentices during this time worked under a contract or learned from relatives skilled in the trade.

By around 1830, it was customary for master blacksmiths to pay apprentices a small wage for their help in the workshop instead of housing them. Most boys completed their apprenticeship and became journeyman blacksmiths by the age of twenty-one. As journeymen, they were considered competent in their trade and capable of performing a range of tasks related to both metalworking and bookkeeping, but did not have enough experience to be considered a master smith. It took many more years of work for young journeymen to gain complete mastery in the craft.

The Equipment and Tools of a 19th Century Smith

Blacksmiths used a few essential pieces of large equipment and a number of small tools depending on the work being done. Every smith required a forge, bellows, and anvil to properly heat and shape their projects. Blacksmiths heated metal in forges fueled by a charcoal fire until it was hot enough to manipulate with small tools. Bellows helped concentrate air into the forge to make the fire hotter.

By the end of the 19th century, most blacksmiths had replaced their traditional bellows with rotary fan blowers, which performed more efficiently than traditional bellows. Once the metal heated up sufficiently, the smith would transfer it to his anvil for shaping. The anvil both absorbed the blows made by the blacksmith during shaping and provided multiple surfaces on which the metal could be worked. By the turn of the century, many blacksmiths added the drill press to their arsenal of large metalworking equipment.

Smaller tools varied depending on the job at hand, but blacksmiths typically utilized hammers, tongs, forms, wedges, and chisels to complete their projects. Hammers and chisels helped form the metal into unique shapes. Tongs allowed blacksmiths to place pieces of metal closer to the hottest part of the coals for quicker and more thorough heating. If they did not possess the tools required for a specific job, blacksmiths would make their own. Over the span of a blacksmith’s career, he could accumulate hundreds of different tools that existed solely for the completion of one particular item.

Blacksmiths often had trouble identifying the tools of other smiths because they were so individualized. This has made studying the process of 19th century blacksmithing difficult for modern historians as well because blacksmiths usually did not document each tool’s unique function.